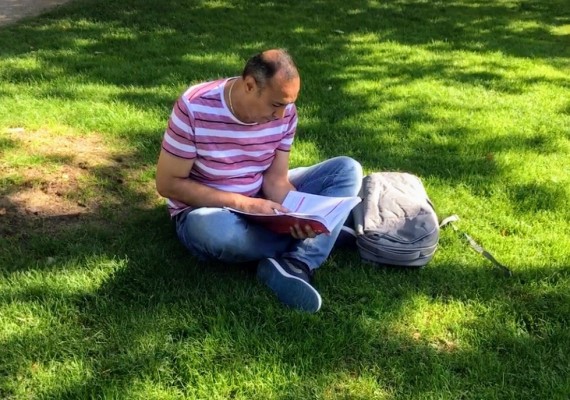 By: Hiraeth Magazine
for Mamoun

From Stateless to Citizen

Mamoun Abu Naser and his family are refugees from Syria. Prior to 2015, both he and his wife were teachers. Mamoun was a Deputy Head Teacher at a Preparatory School of UNRWA (United Nations Relief and Works Agency for Palestine Refugees in the Near East).

Three years ago he made the dangerous overland journey to seek asylum in the Netherlands. His asylum request was granted, and a year and a half later his wife and three young daughters were able to join him, travelling safely by plane. The children are now thriving in a local Dutch school. He is now doing volunteer work and teaching in their community. Mamoun has even translated a documentary film about the crisis of refugees in Greece.

Mamoun and his family were born stateless, with no citizenship in any country. After three years living here, learning the language and gaining the Inburgeringsexamen (Civic Integration Certificate) he and his three daughters are eligible to apply for citizenship. Paperwork and associated costs for filing the citizenship application for Mamoun and his children will cost around €1200, which is no small amount of money for a family on low income.

Please donate to help Mamoun and his family get Dutch citizenship so they can rebuild their lives. It would literally mean the world to them.

Hiraeth is a Welsh word meaning “longing for a home that no longer exists or never was.” Hiraeth magazine began in 2016, when a group of artists and writers in Amsterdam came together with the goal of using the literary and visual arts to combat xenophobia in our communities by gathering and sharing stories of “finding home.” The initial concept of a magazine soon expanded into a diverse platform for creative exploration around the question: What is home? Since then, Hiraeth has become something of a bazaar; a meeting place for cultural exchange including a range of events, collaborations, and a digital magazine and podcast.

In January 2017 we published a podcast interview of Mamoun’s journey to the Netherlands after one of our team, Rowena Dring, met him through an informal language class to practice speaking Dutch over a cup of coffee and they became friends.

No updates posted yet

The deadline has expired

Set up an online group gift yourself

Set up an online group gift